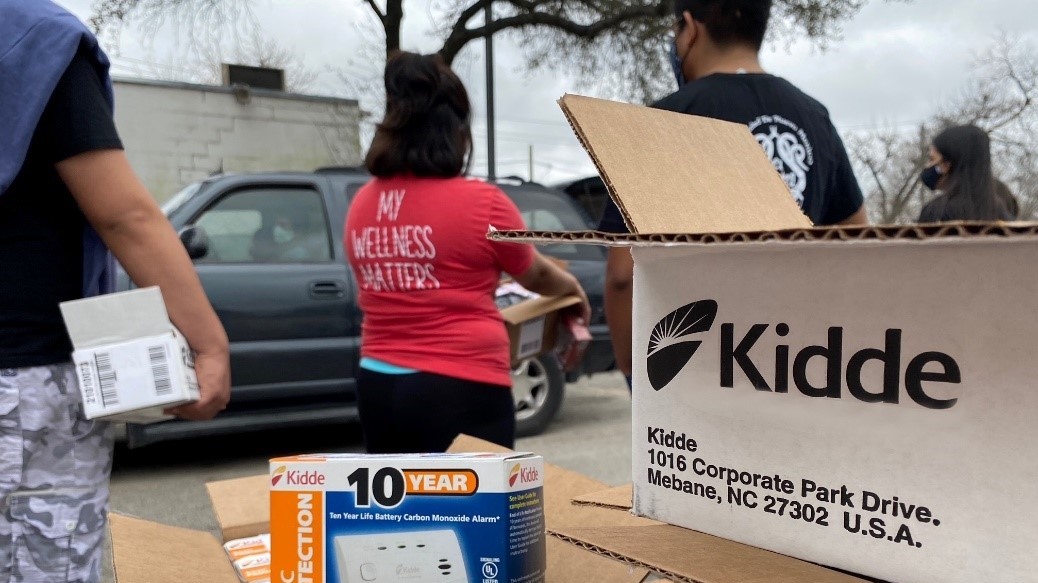 When devastating winter storms hit large portions of the United States in mid-February, Kidde was proud to be one of the first companies to assist. In the wake of Winter Storm Uri, Harris County, Texas – the state’s most populous county and home to Houston – saw hundreds of cases of carbon monoxide (CO) poisoning, as thousands of people remained without power for most of the week. In response, Kidde quickly mobilized to secure a donation of 750 CO alarms and 250 smoke alarms for the Houston Fire Department.
The Houston Fire Department distributed the donated alarms to underserved families in partnership with KTRK ABC13 Houston and the Morales Family Foundation, an organization that supports Latino families in need across the Houston metro area. More than 500 families received Kidde alarms, helping to better prepare them for future severe weather events. Volunteers were also on site to distribute food, water, and pet food to supplement the alarm donation.
The donation is part of Kidde’s long-standing Operation Save A Life program, a public service initiative in cooperation with ABC designed to educate consumers on the dangers of fire and CO poisoning and provide alarms to families in need. Over the years, Kidde has donated more than 1.5 million alarms through Operation Save A Life. “We have a responsibility to help families in our community who are dealing with the unimaginable,” said Sharon Cooksey, Marketing and Communications Manager for Kidde and Project Lead for Operation Save A Life.
“Whether it’s unexpected winter storms in Texas or devastating hurricanes along the Gulf Coast, we’re always there to make sure we’re doing whatever we can to help families protect what matters most.”
Often called “the silent killer,” CO is a colorless, odorless, tasteless gas that can be lethal to humans and pets. The risk of unintentional CO poisoning increases when temperatures plunge and home heating systems run for longer than usual. CO poisoning can also result when appliances that use CO-producing sources – including natural gas, kerosene, propane, coal, and gasoline – are used incorrectly or malfunction.
"During a power outage, people often turn to alternative ways to heat and light their homes but if used incorrectly, this can have devastating effects,” said Cooksey. “It’s extremely important that people remain mindful of potential CO and fire dangers and how to avoid them, which includes installing CO alarms throughout the home.”
To help protect people and pets from CO and fire hazards before, during and after a severe weather event, Kidde shares the following advice:
As a leading manufacturer of fire safety products, Kidde has a deep history of giving back to communities in response to emergencies and natural disasters around the country, and, along with the entire portfolio of Carrier businesses, remains committed to doing what’s right, acting as a true partner for our local communities and supporting families when they need us most. To learn more about carbon monoxide safety and Kidde’s response to the winter storms in Texas, click here.
Corporate Corporate Responsibility Healthy Buildings People
RELATED NEWS
Back